Hey guys. I’m Dr Ishtiaq, I wrote this article when I was a first-year Radiology Trainee / resident.

Today I’m answering a critical question. Should you change your name on Facebook before applying for a training program or job interview?

So to answer this question, I’ll tell you what I did before residency interviews, but I’ve also brought some doctor friends along to give you different opinions as well. So let me know in the comments below, would you change your Facebook name?

This may seem like a really little detail, but when you’re finishing up medical college / school and you’re applying for training / residency, the whole application process feels like you don’t have a lot of control. It’s like your future is in someone else’s hands. So I think when there are little things that we can do something about and have a choice about, it feels like an important decision. So it really comes down to what’s on your Facebook profile and would you be okay if someone in the interview panel saw your pictures or comments that have been made or things that have been left on your wall. Is there that one party you went to or that picture that can be taken out of context if they didn’t know the full story?! Or a story you were telling that may not come across well if someone doesn’t understand that inside joke?! 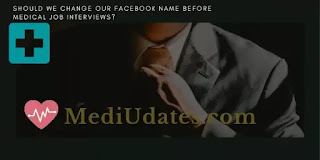 Honestly I think the chances of them looking you up on Facebook is pretty slim, but they’ve definitely been rumors of it happening in the past. Anyway, I was super indecisive about what to do. But before I tell you what I decided to do, check out what some of my classmates did and then it’ll give you more of a balanced opinion on this controversial issue.

Trust me, if you decide to go through your Facebook, you will be shocked to see how much is on there, like it’s a ton, so there’s definitely no right answer. You can tell lots of people do different things. But in the world that we live in where we’re constantly uploading, updating everyone about what’s going on in our lives, I think it’s worthwhile taking a step back and just wondering: Do I want to keep my personal and professional life separate? Are there things, I don’t want to be circulating on the internet? And maybe that’s how you guide what you want to do and what you want to have out there.

Thanks for reading  guys. I want to give an extra special thank you to all our friends who participated in this article writing. And comment below to let me know if you were this situation, what would you do? Would you change your Facebook name?