Last month I fell asleep on nursing counter. I literally couldn’t even make it to my car to go home after finishing my shift. If we are working on just four to five hours of sleep, that can have the same effect as if we’re driving under the influence. If you lose just two to three hour of sleep, your focus and reaction time on the road can actually suffer. You do increase the risk of serious medical errors and medical errors that cause harm to patients.

Hey guys. I’m Dr Ishtiaq Ahmad. Over the past years I’ve been doing duties in the hospital and doing these long hour call shifts. And you know… It’s been interesting that so many of you have been shocked and actually worried that doctors are working under such sleep deprived conditions and so it makes me wonder: Would you actually want a doctor to be treating you or operating on you when they’ve already been awake for 20 or 30 hours? So medicine is not the only field where people’s lives are at stake. And so I went in and researched other safety-sensitive jobs and wanted to know how many hours they’re allowed to work.

According to the world renowned, US Federal Aviation Administration, pilots can fly a maximum of 8 hours in any 24 hour period. And if they have a really long flight, like 16 hours, they must have at least four pilots on board to rotate and prevent exhaustion. Truck drivers carrying passengers can only work for ten hours at a time. And the railway operators have a strict maximum at 12 hours. So what’s happening in medicine? Why are we okay with residents working such long hours when mistakes are really high? 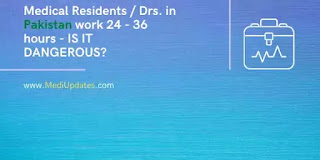 But you know, I didn’t want to assume, you know maybe it was just in Pakistan that we had these crazy hours. So I decided to look at some other countries around the world and find out how many hours residents are working.

So that brings us back to Pakistan. As you guys know, we can do 24 hour call shifts and plus we need to attend ward rounds on next day too. That’s our maximum. And they can schedule us in the hospital to do this once every 4th day. But that’s once every 4th day on average per month. So on a busy week you could be on-call Tuesday, Friday, Sunday and all of a sudden you’re easily working more than hundred hours that week. The day after a call shift is called a post-call day.

So you have the right to go home and sleep and you know… Have a shower and all of that good stuff. But it’s not enforced and there are some specialties or some residents will feel pressured to stay in the hospital and keep working. And that’s where you have people working for 36 hours straight and the reason they can do that is because we don’t have a weekly work hour maximum here in Pakistan.

So I mean this seems really straight forward to me. You don’t sleep as much, you don’t feel as good, and you don’t function as well in the short term or in the long term. There’s a reason that we need to sleep, but if you need some more evidence, let’s look at some other studies.

Studies have shown that being awake for 24 hours has a similar effect on the brain as having a blood-alcohol level of 0.1 percent, which is above the legal limit to drive. A study by Dr. Kaisler, who is a sleep specialist at Harvard, showed that residents, surgical residents who’ve been awake for more than 20 hours were 70% more likely to stab themselves with a scalpel or prick themselves with a needle. Another U.S. study found that residents were more likely to crash their cars, but 16% more likely after they’ve had these extended crashes.

So with all of this, why has there been no change? I mean… I’ve seen lots of people say different things, but what I hear the most is the discussion around handover. So when a doctor finishes working, they pass on the information to the next doctor. So the shorter the hours that you work, the more times you’re passing on information. So it’s kind of like a game of telephone and people argue that maybe you’re actually going to make more errors that way. But to me that just makes me think: Come on, let’s just get better at doing this handover rather than continuing 24 hour shifts.

So I’ve been doing these crazy long 24-36 hour shifts for the past few years and it has its ups and downs, you know. It’s a unique experience. I love feeling the adrenaline pumping, you got your caffeine in your system, and you’re running around the hospital dealing with emergencies, working in teams. I love that, I love being a part of patient care. But you also have those times when you are so exhausted that you’re actually feeling nauseated and your eyes are kind of fluttering shut and you’re struggling, you’re struggling, you’re asking people for help because you don’t want to make a mistake. You’re having others check your work, because you always want to provide the best care possible. But you wonder is the system setting you up for success when you’re feeling that way?!

Can we empower our residents / doctors by having them be at their best so that they can provide the best patient care possible? Because at the end of the day, these are people who have come into medicine because they want to alleviate suffering. They want to actually help people and I would hate for anything to stand in their way of that.

I’m actually so excited to hear what you guys have to say in the comments, because I want this to be the beginning of a conversation. Tell me. Like what do you feel like when you’ve been awake for 24 or 36 hours? Do you want your doctor to have been working for 24 or 36 hoursstraight? And would you want to know? Ah, I’ve got so many questions. There are so many thoughts going on right now. I’m excited to hear what you have to say. Anyway, if you want to read more articles like this, don’t forget to visit my website every now and then. Thank You