Hey guys. I’m Dr Ishtiaq Ahmad. Today I wanted to talk about what it’s like having friends and family ask me for medical advice.

I’ve only been a doctor… Well, you can count it in days or weeks, but not very long and I’ve already had people say ‘What’s this?’ Should I get it checked out?” And actually just recently my cousin texted me asking ”What does it mean to have black vomit?” Graduating from medical college is sort of like learning how to walk. You know, we see a little kid who is maybe one year old you say ”Wow, they can walk. That’s so amazing!” But really we’re all sort of hovering around them and people cover up most of things that are sharp, so they do not whack themselves in the head. That’s sort of what we’re like right now.

Like I’ve got this massive institution that’s looking out for me. A huge team supporting me and people are watching to make sure I don’t mess up. That I’m learning in a safe environment. So when I have, you know, friends or family of someone, come up to me outside of that little bubble that I’m in, and ask me what do you think about this? You know, you’re a doctor. All of a sudden it’s kind of like asking that little baby just to start like sprinting. So some things are super easy to pass off, like if someone actually had a newborn and had a question. I mean, that’s so far out of my field of what I’m learning and studying. It’s easy for me to say ”I’m not even going to touch that, I don’t want to give bad advice.” But it gets tricky when it’s something that I’m actually studying.

That’s like, that’s what happened with my cousin. So when she texted me, I was just in a restaurant and I get this text about the black vomit and it’s sort of uncanny, because right now I’m on the gastroenterology service. So those are the doctors who take care of everything that goes in the mouth and then all the way out to the other end. So the stomach, the intestines, all of that. And probably once a day we get a consult where we have to go and see a patient because they have black vomit. And lots of things can cause that. It may be nothing, could be just that they have had ate some things, some particular food.

But the thing that we get worried about and why they call us is just in case that person is bleeding. So of course that’s the first thing I think about when I get this message from my cousin. I call him up immediately and as the phone is ringing, it’s like my brain is sort of split in two. On one hand over here, I’m this worried cousin, I have all these emotions and I hope he’s okay, and I have all of that going. And on the other side I kind of feel this doctor side kicking in. Thinking ”Okay, so what are the issues? What questions? Do I have to ask is he safe? What’s the next step?” So it’s very analytical and they’re kind of both here, but as soon as he picks up, it’s like all doctor brain takes over. But it got me thinking… 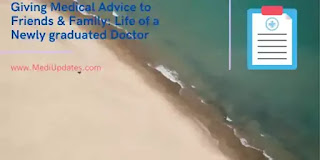 When it comes to family and friends, then where’s the line? I think the take-home point for me anyway is to start thinking, what was it like before medical college? You know, I was a caring friend and a loving cousin and those are really really important roles to still be. And I’m still that person and I don’t just want to be this ”Alright I’m a doctor, answer your questions” And so I want to still be able to play both those roles, answer questions about what’s going on with them. Explain what some of the medical jargon is, because let’s be real… It’s like a different language sometimes. I can do that, but then I still want to be that caring loving person for them too.

So anyway, what do you guys think? Thanks for reading, don’t forget to visit other articles on my website.